Simon Mark-Brown has been directing for nearly thirty years! He formed Republic Films in 1992 and has since shot hundreds of television commercials for most agencies in Australia and New Zealand and has won many international awards including two Cannes finalists. Comedy and storytelling is his thing.

He has directed two international award-winning short films, a documentary on the life of singer John Rowles and a feature film ‘The Sun Came Out’ – Neil Finn, Johnny Marr, Radiohead and Wilco amongst others – recording and performing an album for Oxfam, released internationally through Oliver Stone’s distribution company. He has also directed ‘A Bit Mental’ a doco about mental health awareness.

In 2017 he produced, directed and self-financed a feature film ‘The Catch’ which had a New Zealand theatrical release and did a round of film festivals including Cannes.

Simon completed a bachelor of architecture a few years ago and has renovated a classic 1958 gas station in Pt Chev in Auckland.

in-house DOPs and editors – it is complimentary to Simon’s film making skills and he believes it to be the future of commercial filmmaking – moving content for any screen – shot smarter. 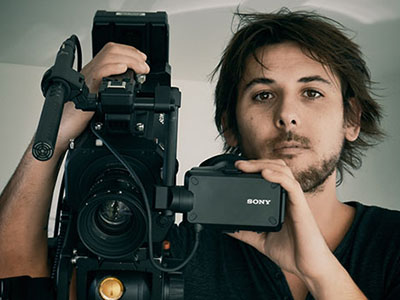 Bertrand Remaut emigrated to New Zealand from France four years ago after completing an Audiovisual Communication degree at the University of Nanterre in Paris specialising in editing and directing.
Bertrand is also au fait with moving graphics (After Effects) and sound design (Pro Tools), photography and camera work.
He has a keen sense of design and aesthetic and most importantly understands story-telling.
Bertrand is young and keen and brings a refreshing, contemporary European attitude to his work.

He is a great DOP and excellent editor and now a citizen too! Yahoo.